This is all part of the red meat industry’s target to be carbon neutral by 2030 (CN30).

This is all part of the red meat and livestock industry’s target to be carbon neutral by 2030 (CN30). CN30 means producing Australian red meat will make no net release of greenhouse gas (GHG) emissions into the atmosphere by 2030, as measured by the Australian Government’s National Greenhouse Gas Inventory (NGHGI).

This will be achieved by reducing emissions from grazing management, lot feeding and processing, and increasing carbon storage in soils and vegetation.

The Industry’s efforts to reduce net emissions are making a substantial contribution to Australia’s international commitments on climate change with farmers – like Stuart Austin and Trisha Crowley – continuing to lead the world in environmentally sustainable red meat production.

"We are massively climate positive."

How does the red meat industry contribute to GHG emissions?

This methane is part of a natural, or biogenic, carbon cycle where the methane breaks down into carbon dioxide (CO2) and water after about 12 years. The grass then absorbs the CO2 through photosynthesis, cows eat the grass and the cycle continues. With stable livestock numbers, the amount of methane produced actually balances the methane that breaks down from the atmosphere.

The natural cycle between cows, plants and the atmosphere takes place over a relatively short period of time, whereas the CO2 from burning fossil fuels can stay in the atmosphere for 1000 years. That means fossil fuels have a much more significant and long-term impact on our climate than the methane from cows.

The animation below shows how the environmental impact of methane emissions from cows is fundamentally different to the CO2 from fossil fuels.

How is emissions reduction possible?

Other initiatives include using dung beetles to recycle nutrients from livestock dung (or manure) to improve vegetation growth and help accelerate carbon storage in the soil.

The end result will be a carbon-neutral, completely natural cycle that looks like this: 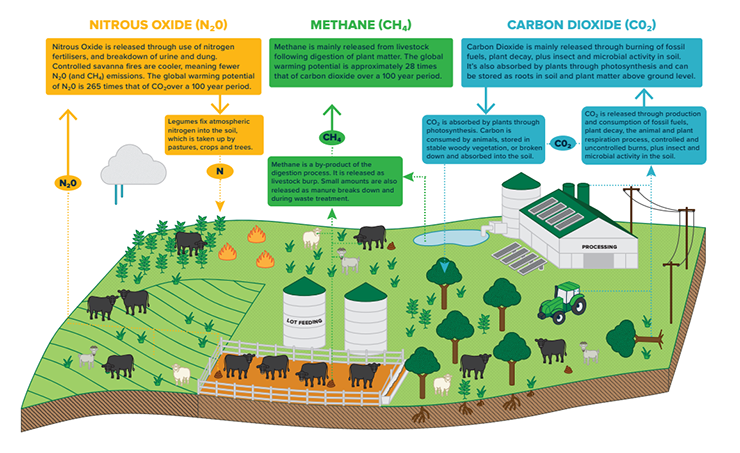 The CN30 Roadmap sets out how Australian farmers and others in the red meat industry will proactively address emissions and become a global leader in sustainable food production. The initiatives include:

Excited progress has been made to date. As well as GHG emissions falling by 53.22 % since 2005, improvements are continuing to be made across our farms, feedlots and processers.

More about red meat and the environment

Through ongoing research and innovation, the red meat and livestock industry is on track to being fully carbon neutral by 2030.