Methane emitted by ruminants like cattle, sheep and goats is recycled into carbon in plants and soil, in a process known as the biogenic carbon cycle. It’s an important natural cycle that’s been happening since the beginning of life.

Cows (and other ruminant animals like sheep) are often linked to climate change because they emit methane, a powerful greenhouse gas (GHG).

But the fact is, this methane is part of a natural – or biogenic – carbon cycle, in which the methane breaks down into carbon dioxide (CO2) and water after about 12 years. Grass then absorbs the CO2 through photosynthesis, cows eat the grass and the cycle continues. 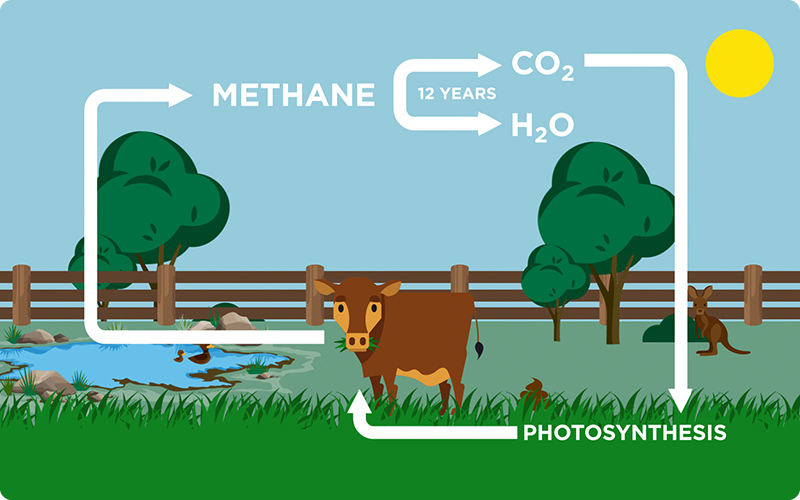 Photosynthesis is an important part of the biogenic carbon cycle. It’s the process by which plants remove CO2 from the atmosphere and deposit it into leaves, roots and stems, while releasing oxygen back into the atmosphere. This carbon is then converted into cellulose – an organic compound that’s present in grasses, shrubs and trees. Cows digest the cellulose, then burp out methane, which returns the carbon to the atmosphere so the cycle can start all over again.

Photosynthesis also facilitates the sequestration of carbon (removal and storage) in soil, large shrubs and trees.

Are fossil fuels part of the biogenic carbon cycle?

While the natural carbon cycle between cows, plants and the atmosphere takes place over a relatively short period of time (about 12 years), CO2 from burning fossil fuels stays in the atmosphere for potentially 1000s of years.

That means that, if methane emissions from livestock remain stable or reduce, fossil fuels have a much more significant and long-term impact on our climate than the methane from cows. With stable livestock numbers, the amount of methane produced actually balances the methane that breaks down from the atmosphere.

The animation below shows how the environmental impact of methane emissions from cows is fundamentally different to the CO2 from fossil fuels.

Get the facts on cows, methane, greenhouse gas emissions and climate change.

The Australian red meat and livestock industry's goal is to be carbon neutral by 2030 (CN30).